I needed to modify a ton of mp3 files today, and thought I would document it for me, and, for you.

rename all files based on id3 tags ** use with caution

REMOVE GENRE AND COMMENTS FROM ALL FILES

SET ALL GENRES TO A SPECIFIC GENRE (SEE BELOW FOR LIST)

RUN DETOX TO RENAME ALL FILES (AS A TEST RUN)

RENAME ALL – TO _ USING RENAME

This seems to mostly work, but still having some issues keeping it stable. Maybe this will help someone else anyway 🙂

Here’s what I did on Mac OSX Sierra Latest:

with this content (change username, and path and IP):

save and exit then:

you should see output and nzbyhydra should be available at http://YOUR.IP:5075
if it all runs you probably want to make it start on reboot:

and here’s how you unload if you need to:

Let me know if this helps you or have a better way by commenting!

A couple of weeks ago I was happy to receive a review copy of MegaPinger from the Mattseh at the WickedFire Forums. Fast forward a couple weeks, and I’ve finally had a chance to put it through the tests and see what it’s like for pinging massive amounts of links quickly, and efficiently.

What came in the file?

An executable, some text files, the license, and a pretty boring Readme file. I understand this program was made by a programmer, so documentation will by default be lackluster; however the documentation for this is pretty much nonexistent. If you don’t know what you’re doing I could see this getting a bit confusing (and, from some of the comments in the forum thread for the program, it’s apparent that it is). But, if you

First off, I must say the threading is incredible. It did bog down my computer a little bit when I would put it up to 100+ threads, but that’s fine if doing it overnight and nothing else is running. When running with more than 10 threads, I did experience problems in Ableton Live and Reason though, so it is something to note. Especially since I’m running on a Quad Core with 4GB of Ram.

So, what’s the program all about? Simple really, you load into it a list of your links, and optionally some spun titles, and it will run through your list and submit them to the common services out there to hopefully aid you in getting quick and relevant backlinks (depending on your titles, and submissions of course).

Does It Support Proxies?

The other great thing about this program is the option of using proxies. I used scrapebox to sort my list of proxies, and then I just loaded the same file in MegaPinger and was instantly sending my pings out through proxies instead of direct to the site from my lowly cable modem. Great stuff.

I tested it out on some small link lists, and everything worked great including the title spinning for submissions. Then I decided I should put it to the real test, and I loaded up my list of all links from the past little while (around ~4400 of them).  This told me there was about 398912 pings to be sent out, and gave me a fancy little progress bar. 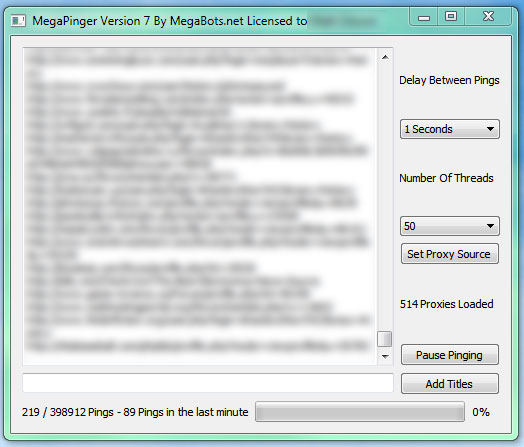 Then I loaded my list of proxies into Megapinger and set it to run. These proxies are kept in a simple text file in the MegaPinger directory. Along with the failed and succeeded ping lists text file that you can refer to later. 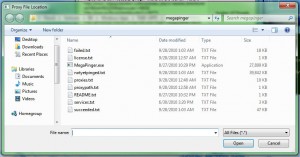 I let this run, and kept an eye on the CPU usage and memory usage, and it was pretty constant to what this screenshot shows below.

This process took about 24 hours to run, if I kept it down at 50 threads. When I increased it I was up to about 300 pings a minute, so the time went drastically down. So far so good. Much quicker than any other pinger I’ve used and I’m sure I could have tossed it up to 500 threads and got upwards of 800 pings a minute with fast proxies, but I didn’t have time to test that much.

I did notice a slight issue, that if you pause the pinger and start it again, for some reason it would double my ‘left to be pinged’ list, and thusly re-ping all the sites it had already done. Minor annoyance since I don’t really pause MegaPinger, but something to note.

As of this writing a support ticket, and message has been sent on the forum to Mattseh without a reply (but it hasn’t been very long! ).

MegaPinger is a Great product with a great price. Aside from the small bug mentioned above I don’t see why you shouldn’t be using this to ping your links.

I’m not going to get into whether pinging is worth it or not, there are many sides to that argument, which you guys can discuss in the comments 🙂