Recently we had to do some work in Arabic for a client of ours. We had never used Arabic in Adobe Photoshop or Adobe Illustrator before. So when the client asked “you can do Arabic” the response was “oh yeah of course” without giving it a second thought. Windows supports Arabic, so in turn Adobe will right?

Adobe does not support Right to left languages like Hebrew or Arabic. Instead you must purchase the separate “Middle Eastern” version of Creative Suite, Photoshop or Illustrator. There are also a couple plugins available that we found that claim to enable Right to Left typefaces in Photoshop. When we actually found them, it turns out that most are for Mac, or just dont’ work past Photoshop 7. We use CS3, so we were out of luck.

So, after much searching, trying, etc. What did we end up doing? What we should have done in the first place.

We downloaded The Gimp for Windows, created a new artwork, typed our arabic text in, and used a proper Arabic font. Then we saved the item as a 600 DPI psd file and imported it into photoshop. It’s not editable like real text, but, it’s good enough for us.

Might save someone else some hours of frustration. Good luck.

Check it out, a couple fancy stickers and two fancy buttons with the feedburner logo. Hot! 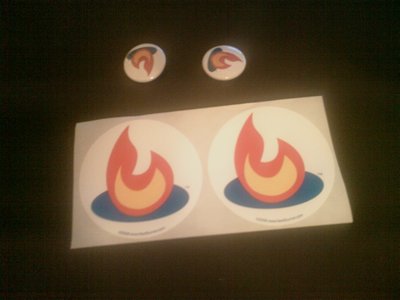 I was looking at a couple local sites today while trying to find a place to trade my cellular phone for a different model.. and I came across this advertisement. I almost didn’t take a second look until I saw the little interac machine at the bottom. Interesting. Check it out.

Now, I’m not complaining, I’m all about making things easier, but when was the last time you actually WENT out for pizza, instead of ordered in? You probably can’t think of too many times can you. This ad right here, is almost a foreshadowing of what’s to come – even if you don’t have a credit card, you must have a bank account so we’ll deliver our products and let you pay right then and there. Great use of technology, local mesh networks or maybe gsm who knows, COD delivery of your favourite electronics, all without ever having to see anyone or go anywhere.

Anyway, that’s my little ramble for today, I’m not saying it’s bad, but I’m also not saying it’s good – in 20 years will nobody leave their homes in fear of “the axis of evil” or whatever they want us to be afraid of today?